I have promised a full account as to the time line from Monday on. So here goes!

Monday, I was having a slow morning. I was reading my email and just kind of poking around. The only thing on my calendar was to pick up Tyler (my 8 year old grandson) after school and then the 3 year old from Day Care. The baby was to be picked up from the Day Care at 4 for an appointment, so I had no need to get him.

I had been trying to get into the beauty salon for more than a week, so I texted asking when I would be able to get in. There was only 3 more days of school and I wanted to get in before then, so that I would not have to take the 8 year old Tyler with me.

The response was, "Could I be there in 15 minutes?) So I headed out the door.

The salon is in the same plaza as the Day Care, so I decided after my salon appointment, to go ahead and get the 3 year old. It was roughly 2 PM. Once I was inside the Day Care, one of the teacher's came into the room and urged me to take the baby as well, because they were watching the weather and were about to start calling parents to pick up children.

Once I had the 2 little ones strapped into car seats, I headed to Plaza Tower Elementary to pick up Tyler. Half way there, they came on the radio and announced that there was a tornado coming down and to take shelter immediately. They gave the location and it was very near to where I was at.

At that point, I realized that I would not be able to get Tyler and I needed to get the 2 that I had, into a shelter.  I drove as fast as I could to my home, where I had a large tornado shelter.

It was pouring rain as I made the dash towards home. Several times, I considered stopping and running into a business, but in the end, keep driving.

The road was blocked at Highland East Middle School, by parents trying to get their kids. No one could get through either direction. I skirted into a neighborhood and and using my GPS, I was able to work my way out, back onto 4th street, but on the other side of Highland East.

As I pulled into my garage, I told the 3 year old that I needed him to help me keep the baby safe and that when I unbuckled his car seat, he was to run as fast as he could to the backdoor and wait for me.

He asked if he could run real fast (a no-no in our house) and I told him, "yes."

I few minutes later, I received a call from my husband asking me if I was in the shelter. He was in Alaska visiting our son, who is stationed there. Rick was watching an Oklahoma channel live and knew that what was going on. I let him know that I had the 2 younger children, but had been unable to get Tyler. Our daughter, who is a single mother, often works at the Moore Medical Center, but on that day, she was at the Norman branch.

Eventually, I heard a swishing sound, but nothing like the sound that I had heard then a tornado went over our house a few years back. Shortly thereafter, I heard the sirens of emergency vehicles.

My neighbors and I emerged. We found some debris, but thought that Moore had dodged a bullet and that all was fine. My power was out, so we were not able to catch any news reports.

After the storm passed, my daughter called (I could receive calls, but could not call out, due to cell towers being damaged) and asked who I had with me and if everyone was OK. I relayed that I had the 2 little ones, and that where was no damage here and we were fine.

Lindsay was about to run out the door to leave work to head over and get Tyler, when a co-worker got up, turned the radio off, and asked my daughter to pray with her. She had heard about the school and did not want my daughter to hear how bad it was. Lindsay then left with a co-worker driving her.

Lindsay and Heidi are RN's and were in scrubs, because of that, they were able to get into the disaster area, fairly quickly. Tyler had been walked with many of the students to a nearby church with a big parking area, to await parents.

When Lindsay seen Tyler, he had blood on him. That blood turned out not to be Tyler's. His teacher told how Tyler had helped calm other children and that he had helped another child by holding his arm in place. We believe that his arm was broken and Tyler had held it together for him.

Lindsay called and let me know that she had Tyler and that he was safe and that it was real bad. It was not until later that we learned that the children who had died, were in the same hallway with Tyler.

Lindsay then went to her house. She lived right across from the Moore Medical Center, which was destroyed. Her street was not much more than rubble. Her house had a sink embedded in the roof. Her bedroom windows had been blown out so strongly that the bedroom was blown off and was in her front yard. The water from the pool had been emptied into the bedroom. We later found a desk from one of the schools in the pool.

A male friend of Lindsay's was at her house before her. He had pulled a deceased infant from the nearby 7-11. He and another guy carried the family to the pump area, so that they could be taken to the morgue. He took his shirt off to cover the baby with. I won't tell the details of the condition of the baby. It is very graphic.

While all of this is going on, my husband, up in Alaska knew that Tyler's school was hit and that Tlyer was in it. He was going crazy with worry. He keep calling me (not mentioning that Plaza Towers had been hit) asking about Tyler. It was a while before he heard that Tyler was safe.

Lindsay and Heidi then went to the hospital to see if they could help. The hospital had all the help that they needed so they headed to my house.

The friend had Tyler and was trying to get him to me. Lindsay arrived about 7ish. Again, they were able to get around because they are nurses. Mike was not as fortune getting around. It was almost midnight before they arrived at my house. The traffic was in gridlock with all the roads covered in debris.

We were without power for 2 days and did not get internet or cable for almost week. It is hard to complain about these things in light of all the destruction.

The Day Care Center that the younger 2 children had been in, is also gone. They had 13 children and several teachers left when the tornado hit. The teachers took the children into a bathroom and laid on top of them. All teachers suffered some injuries and some of the children had minor injuries.

The Moore Medical Center is destroyed. All of Lindsay's co-workers that were in that building are safe, but badly shaken. All of their cars are totaled. One of cars can not even be found. 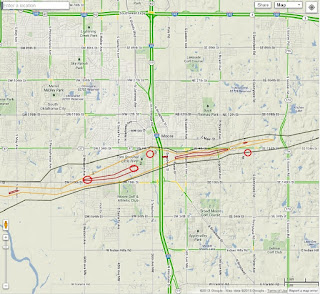 Gray lines are the path of the tornado. Yellow shows the area that was damaged. Red area is extreme damage.

The red circle with the #1 beside it, is the Day Care that the 2 little boys went to.
Red circle #2 is Plaza Towers Elementary School
Red circle #3 is Lindsay's house
Red circle #4 is my house

You can see that the Day Care Center and Plaza Towers Elementary were in the extreme area.

I did not go out for almost a full week; as my job was to take care of my daughter's 3 children. I had not realized until later, how close it got to my house. The tornado veered North about 2 blocks from me or my house also would have been hit.

We are blessed, it was so close for all of us. Minutes and feet literally made a difference for our family.

You can see Tyler and Lindsay's interview here. Sorry, you will have to get through the Moore liquor store bit first.

On May 31st another tornado hit Moore again. This time there was not as much damage, but the house belonging to Tyler's father, burned down to the ground on that night. I am not sure what caused it to catch fire, but there was a lot of lightning that night. My church also had a window brake during the second bout of tornadoes.

In and among the horror and grief, we have had some light moments, such as the 3 year old exclaiming that the tornado spilled  the pool and Tyler being told to get out of the house what was most important to him first, and he grabbed a can of Vienna sausage.

Every disaster relief church that we went to, gave us Vienna sausage for him.

It has been a rough 2 weeks, but we have seen the best of people helping us from all over the world.

With your help, we will rebuild Moore. It really is a wonderful community. The residents have a strong bond to one another that only such a disaster can forge.

Thank you to everyone who helped or prayed for us. Your outpouring has meant so much. You have made it possible for us to hope.

Some people have asked me about where to send donations to help Lindsay. You can send them through paypal using my email address: mariharpham@hotmail.com  I will get it to her. I see her almost daily.
Posted by paper fun at 6:36 PM