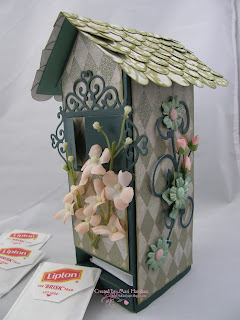 Tea Bag dispencer - Today's challenge at Alphabet Challenge blog is K for kitchen. Well, I decided to make something for my Kitchen. I have seen these Tea Bag Dispencers a few times on varies blogs, but I had a devil of a time finding one when I was ready to make one. So I really just kind of made it up as I went along. I will tell about the process at the end of this post for anyone interested in making one. 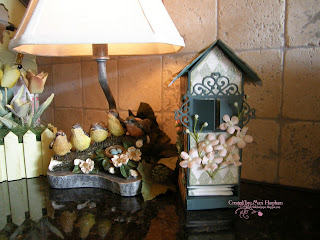 My kitchen is decorated with birdhouses and this is a shoot of the dispencer in my kitchen.

I am one of the few Americans who really enjoys a cup of hot tea in the morning and I only like the plain old Lipton. I have tried other flavors, but I just don't care for them, so this is a very practical project for me. 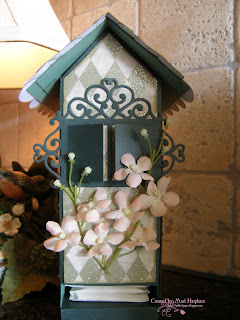 Here is a close - up of the front. I used HCSB die to cut the window. The flowers were my mother's. Many of you know that my mother passed away a few weeks ago and she was a hoarder. This were in her things and my stepfather let me take a few. I like the thought of having something that was hers in my kitchen. 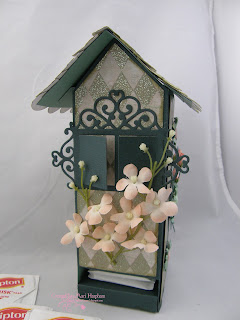 My papers are Prima's Nursery Designs. I inked it with Ranger's Forest Moss. 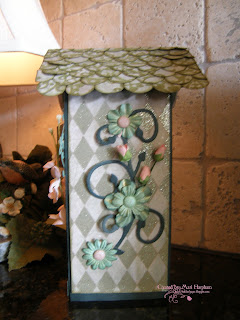 Here is the side. The swirl is MD die cut. 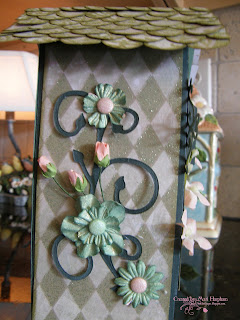 The flowers are Prima's and I misted them with Tattered Angels Gumdrop mist. I used sparkly brads for the centers. The pink rosebuds are Melissa Frances. 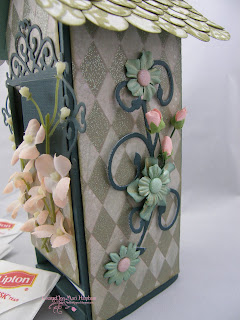 To make the body of the dispencer, I used a 12 x 12 sheet of cardstock. I just eye-balled ( yes, that is a valid crafting term - LOL) the height that I wanted and cut the rest off.

Now at this point is when I measured my tea bag. I wanted them to lay flat and have a bit of wiggle room so that it would be easy to pull them out, so I rounded my measurement up a little. Now I was ready to score.

My first scoreline was for the back, then the side, front and the other side. I did not cut the extra off. The extra length will be used to glue the back piece with.

Next I cut about an inch and a half of the bottom of the front. This will make the finger grip at the bottom.

I then turned my attention to the containers peak. The cardstock is still flat at this point, so is fairly easy to work with. I cut down the 4 scorelines to where I wanted the roof to stop. I then cut off the sides between the score lines. 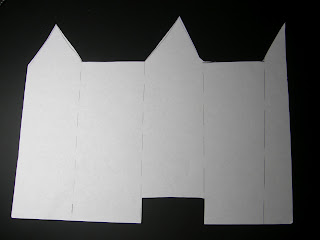 This is  roughly what your cardstock will look like at this point. 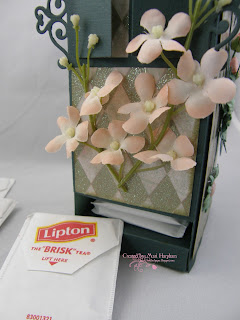 Now for the floor platform. It is important that you have a bit of a platform to make it easy for your fingers to be able to pull a teabag out without hitting your finger on the counter. It is just a typlical box lid that is put in, in reverse. 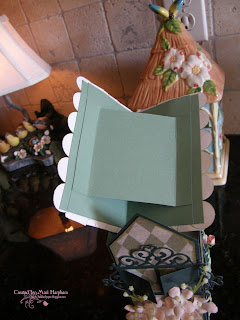 The roof is another box lid that I cut the front and back side from. Just scoring where the side are. 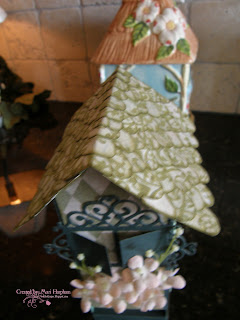 This is the top of the roof. I cut about little circles and inked them all to make my shingles. It was a pain staking process, but I am so pleased with the end result. 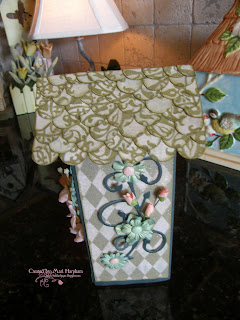 This is the side view with the roof. 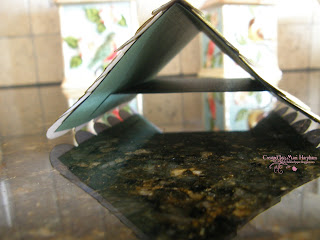 The roof sitting on the counter by it's self. 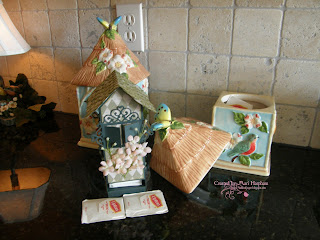 Another shoot of it in my kitchen. 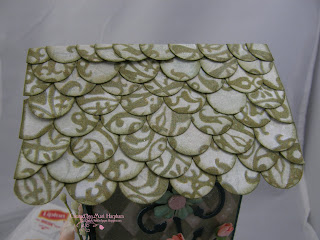 The roof on the dispencer. 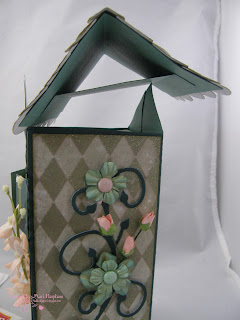 Another angle of the roof. So you could see how the roof fits. 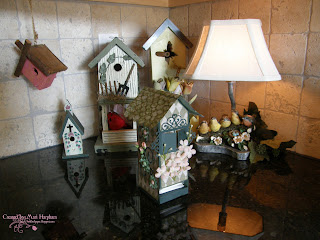 Pile it on Challenge #26 make your own Embellishments
The Paper Shelter #70 Punches/dies
C Inspirations #169 Anything goes
Crafty Creations Challenges #176 Embellishments
Charisma Cardz #25 Anything Goes
Stampin For the Weekend #12 Your Style
Crafty Catz Weekly Challenge #139 Metal (brads)
Fussy and Fancy Challenge #66 Fancy Folds
Belli Challenge #146 Anything but a card
Posted by paper fun at 4:00 AM